My daughter had a giant-sized, shallow sliver sticking out of her finger. It could have been an easy, quick fix.

I reached for her hand. She hid it behind her back and frantically screamed:

But I can get it out.

You can get it out. Why don’t you try?

Everything in me wanted to take control of the situation. I was antsy with impatience. I wanted to fix it. To fix her.

Instead, I had to wait until she was ready.

After a half-hour of cajoling and failed attempts at reaching for that sliver, we left the coffee shop. She crawled into her seat in the back of the van. My friend handed her a wet-wipe to see if that would “help” her.

One minute later, with a triumphant smile on her face, she announced: “I got it!”

It was gone. It hadn’t hurt. She had done it herself. And she was proud. She spent the morning bragging to anyone who would listen: “I had a sliver in my finger this morning. And I took it out myself!”

My little lady had the opportunity to learn that she is capable. That pulling out the shallow sliver doesn’t hurt; the pain is caused by leaving it in.

I learned that she is capable. That I have a really strong need to “fix” things, and this desire is not always helpful. (I apologize to all my friends and family who have been on the receiving end of this urge to “help.”)

In his book A Hidden Wholeness, Parker Palmer writes: “On rare occasions, we may need to breathe someone into life who is incapacitated in a way that threatens his or her well-being. But most people can and must come to life in their own way and time, and if we try to help them by hastening the process, we end up doing harm.”

He writes: “We grow toward true self in a space where our growth is not driven by external demands but drawn forward, by love, into our best possibilities.”

What does this look like in action? How do I parent like this? How do I bring this space into my marriage and friendships?

Making space. Isn’t that what God does for us? Isn’t that how God breathes life into our souls? How God draws us forward into who we are created to be. With love. Not hurried. Not forced.

A while ago, I attended a Bible study where the evening’s focus was the second day of creation in the first chapter of Genesis. 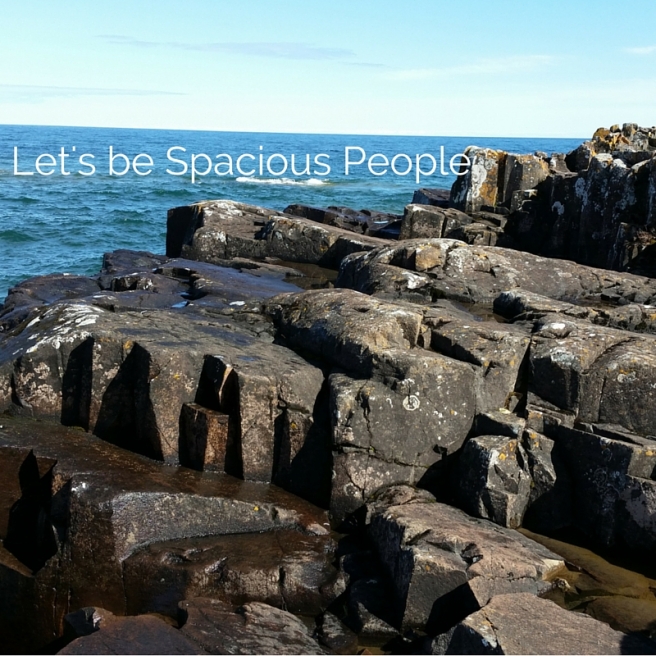 This creation poem describes God separating skies from water, making room for life to appear. We learned about the word Raqiya, which means “to expand, to make space, to make broad.” We were told that it is derived from the Hebrew word: Raqa, which can also mean “to beat or stamp out.”

The meaning of Raqiya as it is used in the creation story seems obvious: God expands and makes space to make room for new life.

God didn’t just do this once and quit.

Each person is a continuation of this primordial creation.

We each grow and evolve.

Hopefully, in our humanity we become vessels for Life.

In order for us to bear this Life, this light, God has to open our hearts, open our minds, expand us from the inside out.

And yet, for many people, our experience of church and religion bears more resemblance to this “beat out” or “stamp out” definition of the word Raqa.

Stamp out your sin.

Conform your thoughts, your beliefs, your life to fit our mold.

Here, let me get that sliver for you.

What happens to our hearts and souls in this process?

Let’s make room for one another. Let’s hold space for each other.

Life follows the act of making space. And it is Good.